I am interested in thinking critically about the how the design of fabrication systems influences one’s ability to use fabrication as an expressive medium. I was first introduced to fabrication in HCI through domain-specific CAD tools that allowed individuals to rapidly build objects using common materials and a laser cutter (Otherlab Computational Design Tools, AutoDesk 123D Make , Sketch Chair). What I find most interesting about this work is the way in which the design and construction leverages the capabilities of computation. These systems support efficient building processes and also add a new aesthetic to the resulting object. A creative space is opening for new art forms and crafts that take advantage of a symbiotic relationship between computation and construction. The production of these new art forms could have the benefit of introducing new audiences to design and fabrication, and supporting educational objectives through fabrication activities.

I have worked on two projects that explore different aspects of using fabrication as an expressive medium. The first project, AnyType, focused on the process of composing a digital artwork and investigated how individuals were able to construct meaning and express themselves through that process. The second project, Tangles, allows individuals to design and build 3D models. In the next two sections I detail the findings and insights gleaned from these two projects. I conclude with a few open questions.

AnyType is a mobile application that transforms shapes that people identify in their surroundings into a unique typeface. It is designed using the principles of aesthetic interaction, which emphasize engagement and storytelling over qualities like the beauty of the result, speed, and efficiency. To use AnyType, an individual is asked to capture five shapes. Each shape is presented as a frame overlaid atop the device’s camera. The user has to search her surroundings for something to fit into the frame and capture it (take a photo). After the set of five shapes is captured the application uses the captured shapes to create the letters of the English alphabet and presents them to the user. The user is then able to write a message or compose an artwork using her personal alphabet.

Through two studies, we observed how AnyType changed the way users related to their environment. The shapes overlaid on the screen caused them evaluate their surroundings in a new context. They began to assign new value to features of their everyday environment such as textures and colors that they had previously overlooked. They thought deeply about how the objects they captured would communicate meaning when arranged into a typeface. As a result, users were surprised at their ability to capture and express their emotions using the application. The process of producing typefaces and compositions led them to reflect upon themselves and create new kinds of artworks, which they had pride in. A full description of the system, study, and findings can be found in the paper AnyType: Provoking Reflection and Exploration with Aesthetic Interaction (CHI 2013).

AnyType focused on the way in which individuals navigated an artistic process to create objects of self-reflection and self-expression. Though the process we studied focused on the production of a digital artwork on a mobile device, I believe some of the same design principles could be applied to interfaces for fabrication. This is especially the case if the goal of those interfaces is to allow individuals to express themselves through the production of physical artworks. The AnyType study shows the power of using the capabilities of the device to inform interaction instead of attempting to mimic actions from other mediums (i.e. drawing, painting). It highlights the important role that the process of production plays in allowing individuals to develop a voice within a medium. The process changed the way the individual saw the objects around them and as a result gave them the ability to transform their unique point of view into artworks that served as reflections of their lives and emotions. 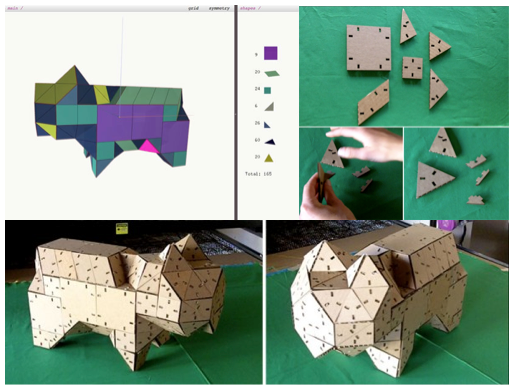 The Tangles project falls under the umbrella of what Resnik calls a “computational construction kit.” I completed the project as a summer intern at Otherlab in San Francisco. The goal of Tangles was to design an algorithm that could take any 3D object as input and generate an approximation to that object which could be physically constructed out of three kinds of triangles (right, equilateral, and isosceles). In designing the algorithm, I found beauty in the different ways objects could be approximated using geometric shapes. The style of the objects created using only triangles began to mimic trends I was seeing in the design world (Annika Frye, Elisa Strozyk, Phil Cuttance). I designed and implemented a user interface that gave the user control over the input into the algorithm by letting them move the model against a background grid, specify planes of symmetry, and design their own geometric shapes by merging existing shapes together. The program could export a cut-file that specified the paths for printing the parts needed for construction. In our experiments with Tangles, we build models out of cardboard, which was cut into pieces by a laser cutter. Additionally, the user interface was able to display a series of construction steps to aid the user in building their model out of cardboard.

While a formal evaluation of the Tangles system was not conducted I did receive informal feedback from artists and educators about the system. The strength of the system in the eyes of educators was the ability for students to input any model they desired into the program and then physically construct it using a standard set of parts. The process of modifying and customizing the model was seen as something that could increase the individual’s connection with the object. The project seemed to dovetail nicely on themes of “Construction and Ornamentation” and “Construction as Personal Expression” outlined in Eisenberg and Buechley’s Pervasive Fabrication: Making Construction Ubiquitous in Education.

There seems to be a dominating opinion in fabrication in HCI literature suggesting that when certain constraints are removed by technology, the individual is better able to focus on being creative. From my own experience and observations with AnyType I find constraints to be the defining characteristic of any medium for expression. The relationship between constraints and creativity is complex and future research could shed light on the connection between what is constrained and how the user navigates such a constraint. One possible study may look at how constraining of different features in a CAD environment affects the way in which individuals create objects and how they connect to the resulting object.